CRISPR is an acronym for Clustered Regularly Interspaced Short Palindromic Repeat. CRISPR is also called as CRISPR/Cas9. The scientific world is attracted by this revolutionary technology. CRISPR technology is a simple yet powerful tool that is used for editing genomes. This technology is used to alter the DNA sequence and modify gene function. Its major application includes correcting genetic defects, treating, and preventing the spread of diseases and is also used improving crops. 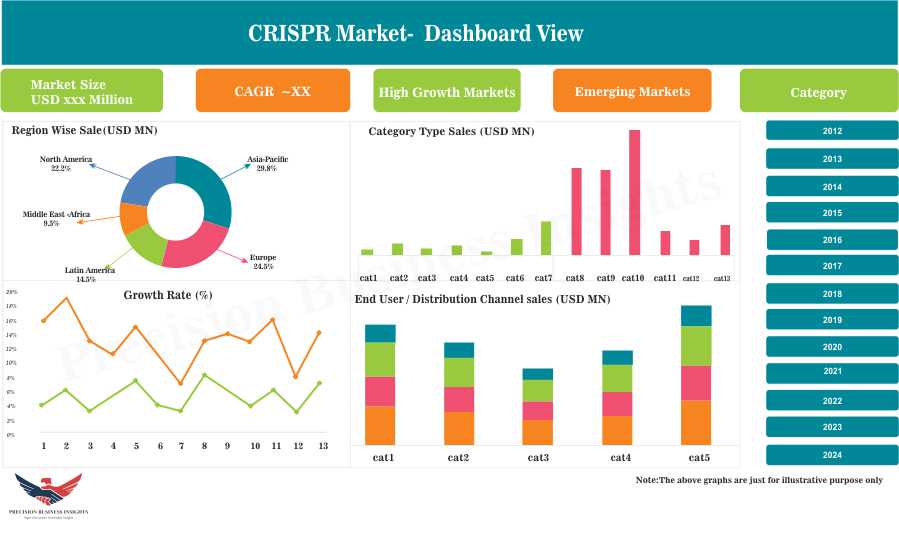 CRISPR market is segmented based on the product type, application, and end user

Based on the product type, the market is segmented into the following:

Based on the application, the market is segmented into the following:

Based on the end user, the market is segmented into the following:

Geographically, global CRISPR market is segmented into North America, Europe, Asia Pacific, Latin America, and the Middle East and Africa. North America CRISPR market expected to be dominant market when compared with that of the other regional markets. The technological advancements, increase in the R&D expenditure, and the increasing government funding expected to create demand for CRISPER. The Asia Pacific is expected to show significant growth over the forecasted period. The growing prevalence of the genetic disorders in the emerging economies such as China and India are expected to boost the market growth of the CRISPR market.

Some of the players in the global CRISPR market include:

Key Features of the Report:

The above mentioned segmentation is tentative; it is changed according to client’s requirement, or research feasibility.