Merkel cell carcinoma is an uncommon type of skin cancer and also known as neuroendocrine skin carcinoma or trabecular carcinoma. It occurs due to abnormal growth of Merkel cells. This cancer has grown and spreads rapidly beyond the skin. Merkel cells are the type of skin neuroendocrine cells as they share some features with hormone making and nerve cells. Merkel cells are found at the base of the epidermis, the top layer of the skin and are very close to nerve endings which helps us to sense touch and light. 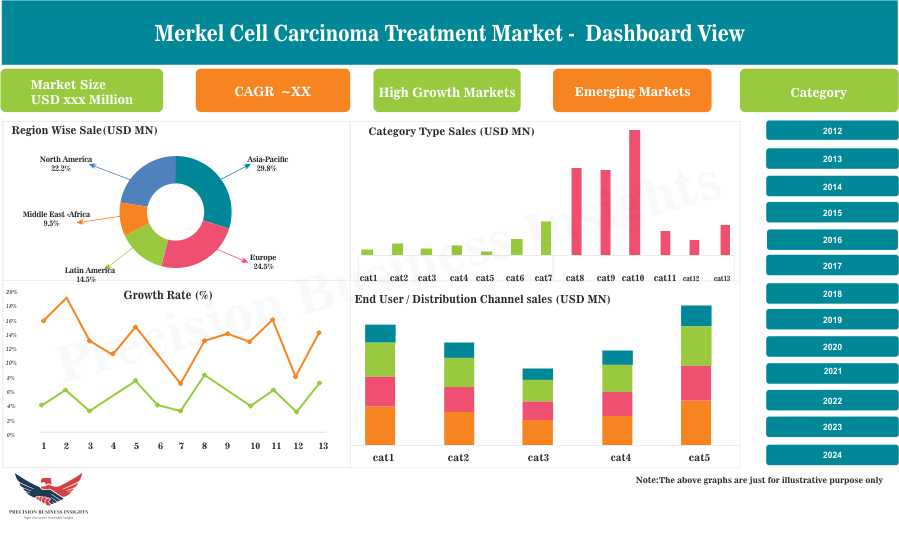 Increasing cases of Merkel cell carcinoma and rising demand for immunotherapy treatment are major factors, expected to drive the growth of the market. Furthermore, growing investments in R&D, developing healthcare infrastructure, are the factors which are propelling the growth of Merkel cell carcinoma treatment market. However, lack of nursing care, adverse effects associated with chemo and immunotherapy drugs, high cost associated with the medicines, restricted adequacy of the medication and stringent regulatory framework are expected to hamper the growth of MCC treatment market.

The Merkel cell carcinoma treatment market is classified on the basis of drug class, infection type distribution channel, and geography.

Based on drugs, the market is segmented into the following

Based on distribution channel, the market is segmented into the following:

Rising prevalence of Merkel cell carcinoma is expected to create lucrative opportunities over the forecast period. According to National Cancer Database, every year around 1500 and 2500 new cases of Merkel cell carcinoma are reported in U.S and in European region respectively. The current adoptable treatment for MCC is typically a surgery however, chemotherapy and immunotherapy drugs are given to the patients in longer periods. The treatment for MCC are being challenged because of low attention towards the condition and its comparable appearance to the skin conditions. As per CDC, MCC has high mortality rate among all other skin cancers. The present social and financial status of MCC market are colossal and it is expected to have a lucrative growth during the forecast period.