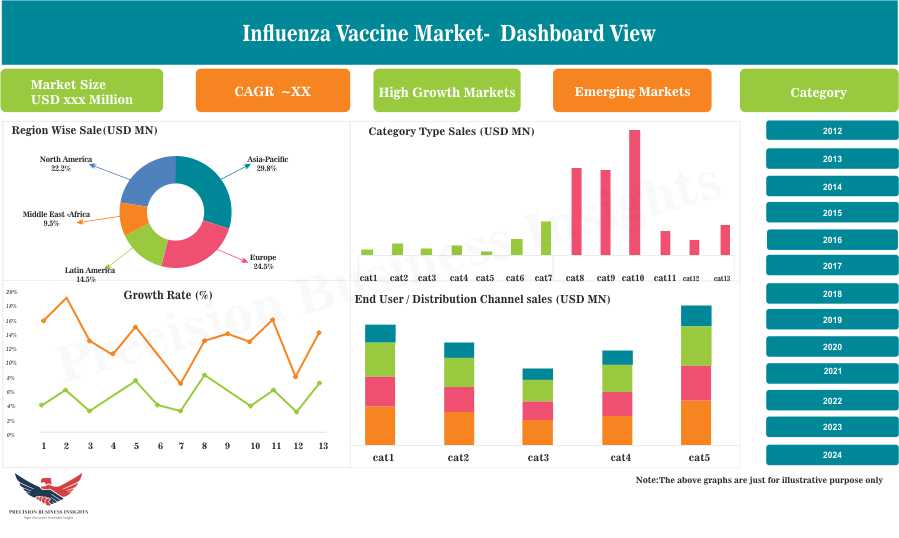 Influenza Vaccines market has been segmented on the basis of vaccine type, strain type, formulation type, end user, and region

Based on vaccine type:

Based on strain type:

Based on formulation type:

Based on distribution channel:

Influenza Vaccines market has been segmented into five regions Viz. North Americas, Europe, Asia Pacific, Latin America and the Middle East and Africa. Each year, there are two seasons of influenza because of northern and southern hemispheres have winter in different times. An occurrence of influenza infections high in developing countries than developed counters which make the market lucrative for players in developing countries. However in North America expected to witness significant growth owing U.S.’s yearly vaccination programme. In Europe influenza vaccine limited to the high-risk groups rather than blanket vaccination programmes which market to grow at moderate growth rate. Asia Pacific market expected to grow at significant CAGR owing to increasing affordability, larger and subsidized immunization programs in several countries in the Asia region.

Some of the players in the market include GlaxoSmithKline plc., Seqirus (CSL Limited), AstraZeneca, Sanofi Pasteur Inc., Sinovac Biotech Ltd., Novavax, Inc., DAIICHI SANKYO COMPANY, LIMITED., Mitsubishi Tanabe Pharma., Protein Sciences Corporation to name a few. There are several influenza vaccine candidates in a late-stage clinical pipeline which are expected hit the market in the forecast period. For instance, in 2017 Daiichi Sankyo’s VN-100 and MEDI3250 influenza vaccine expected to get market approval in Japan.